Story of Ambulance – A vehicle for carrying sick or injured people

An Ambulance is a vehicle for carrying sick or injured people from their home or place of sickness to a hospital or clinic. Today, two types of ambulance are in use-civilian and military. The civilian ambulance is built for speed and smooth riding. It is equipped to carry only one or two patients along with an attending doctor or paramedic who gives first aid in it on the way to the hospital. The military ambulance is larger and sturdier. It is designed to provide emergency treatment for four to six stretcher patients. 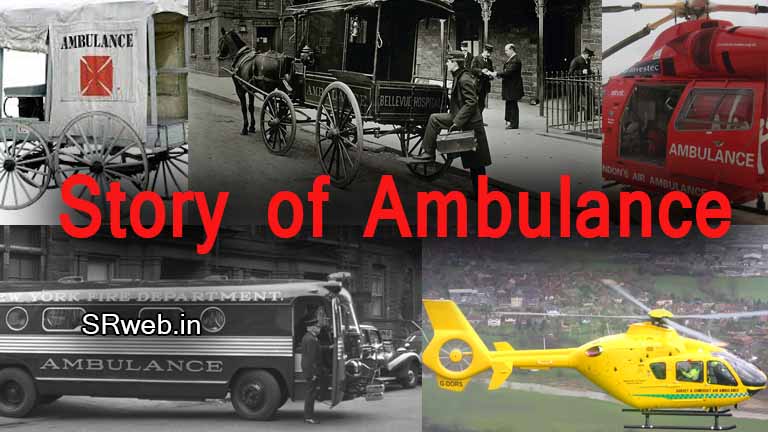 During the Crusades, in the 11th century, the Knights of St.John were taught first-aid treatment by the Arab and Greek doctors. This enabled the Knights to take care of the wounded soldiers on the battlefield. However, the death rate among the wounded soldiers was very high. Actually, the soldiers were cleared out between 15 and 36 hours while lying wounded on the battlefield. Moreover, the procedures used for removing the wounded were crude and clumsy. The soldiers were paid to transport their wounded comrades on stretchers and wagons. But due to a shortage of equipment and the delay in getting skilled medical care, amputations were very common.

In 1792 a young French surgeon joined Napoleon’s army and served in many battles in Europe. A fine military surgeon, Dominique Jean Larrey was anxious about the pitiable condition of the wounded soldiers. He introduced many unusual and advanced procedures for the removal of the wounded soldiers from the battlefield. He brought in wheeled carts called the ‘ambulance volante’ (flying ambulance) that could be moved about speedily, transporting surgeons to the battlefields and the wounded soldiers to nearby hospitals. This helped to increase the survival rate among the wounded. Trained and well-equipped staff were also sent out from field hospitals to take care of the wounded and bring them back on stretchers or hand-carts.

Subsequently, animal-drawn wagons or carts were used for the first time as ambulances when the Crimean war was raging in Europe in the 1850s. Later on, ambulances used in the American Civil War between 1861 and 1865. were made of one size, shape etc., They were drawn by horses. It was only in 1916 that the first motorized ambulance was introduced in Mexico by the Government of the United States. Since the signing of the Geneva Convention in 1864, ambulance units and the wounded in their care have been considered neutrals on the field of battle. The Geneva Convention in 1864 laid down the international protocol of not attacking ambulance units and the wounded under their care during war or any conflict.

Casualties were at first transported by rail to hospitals in the 19th century. Specially built ambulance trains were regularly used to carry the wounded soldiers. They were found to be much more convenient than the poorly built freight wagons that were used in the beginning. Sometimes these actually increased the extent of injuries of the wounded who were transported in them.

During the Franco – Prusso War in 1870-71, nearly 90,000 wounded soldiers were transported by rail and lakhs of others in the conflicts that followed. In 1885-86 the British Red Cross Society partly provided a sum of money for a hospital train used during wartime. The first hospital train for home use was introduced in 1900. Various charitable organizations provided money for it and it was named the Princess Christian Hospital Train after Princess Christian of Schleswig – Holstein who arranged the raising of funds. Other means of quick evacuation were used like balloons for airlifting soldiers during the siege of Paris by the Prussians.

Between 1890 and 1910, M. de Mooy, Chief of the Dutch Medical Service, was one of those who took the first steps in the development of air ambulance service. He suggested evacuating the injured with the use of litters suspended from balloons. The French government was at first against the idea of building air ambulances in spite of the passionate pleas of French senator and medical doctor Emile Raymond and another leading doctor, M. Gautier. In fact, in 1912 Raymond flew over the battlefield in Amiens and helped stretcher parties to locate wounded soldiers. However, it was only in 1923 that a supplement was added to the 1906 Geneva Convention about air ambulances.

In the United States of America, the first air ambulance was designed by Captain George Gosman and Lieutenant Albert Rhoades in 1909. The design provided for the doctor to pilot the plane himself. However, the crashing of the first test flight turned out to be a setback. Soon a number of articles appeared making out a case for the air ambulance. In the 1920s the Chief Surgeon of the United States Army, Colonel Albert Truby, ordered a change in the design of an existing plane to carry a pilot, doctor and two patients. With the passing of time, in 1925, a section of the U.S.Army Air Corps was created to specifically deal with airborne evacuations and delivery of medical supplies. By the 1930s most military bases had specially equipped air ambulances. In the 1940s helicopters were also taken into air ambulance service. This was a great change that happened suddenly.

American businessman, Bill Mathews introduced the first civilian air ambulance at Etna in California in 1958. The town’s only doctor, Granville Ashcraft, used the helicopter to transport patients. It was also used to deliver drugs during emergencies. In the 1960s ambulance helicopters began to be used in Europe.

The National Institute of Health and National Academy of Sciences published in 1966 a white paper on emergency medical services. The white paper set standards for emergency prehospital care. Military helicopters began increasing and making efficient emergency medical services in 1969. A country-wide Emergency Medical Service System was designed and put into effect by the doctor William Cowley. He was the person who coined the phrase ‘Golden Hour’ stating that if a trauma (a shock caused by violent injury) patient was transported quickly to a health care facility within the first sixty minutes, his or her chances of remaining alive would be greatly increased.