The earliest mirrors that were used by the ancient Egyptians, Etruscans, Greeks, and Romans usually consisted of a thin disc of highly polished metal, in most cases bronze. During the Middle Ages (the time between the downfall of the Roman empire and renewed interest in art and learning) these hand-held mirrors were replaced by portable mirrors, enclosed in ornamental cases of ivory or precious metal. These became popular with ladies who hung them from their belts. 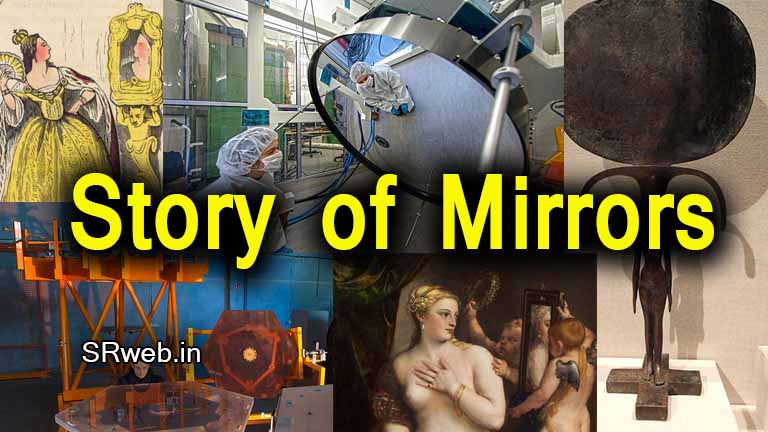 In the late 12th and early 13th centuries, the Europeans discovered the art of using glass with a metallic backing. Nuremberg in Germany and Venice in Italy became reputed centers for the production of mirrors with the backing of a mixture of tin and mercury. That was in the 16th century. Even 100 years later mirrors were still generally very expensive. They were far beyond the pocket of the common man!

The turning point in the production of mirrors came in 1835. The German chemist Justus Von Liebig discovered the coating process called silvering. This is still in use today. In this process, the silver from silver nitrate is deposited on glass and protected from stain by a resin in thin sheets or paint.

The earliest mention of the mirror – makers in Nuremberg in Germany dates back to 1373. Unlike the people of Venice in Italy, the Germans backed their mirror glass with a mixture of tin and lead instead of mercury. The process of converting the simple plate-glass into mirrors was carried out by the state mirror manufacturers in Nuremberg and the nearby town of Furth. Gradually, however, in the course of the 18th century, the entire mirror industry came to be located in Furth.

The mirror manufacturers of Furth successfully survived World War I and the Great Economic Depression of the 1930s. In recent years four of the town’s leading manufacturers have come together under the name Flabeg, which is thus the world’s largest manufacturer. The German firm exports over one-third of its mirror production to 100 countries around the world. Now-a-days mirrors of different types for varied uses are made in many countries of the world.

For the most accurate mirror image, the reflecting glass surface should be very smooth and flat. Some mirrors are not flat for a reason. A concave mirror curves inward and focusses the light in such a way so as to make the reflected image appear larger than the original object. A convex mirror curves outward. It enables the mirror to reflect more of the area it faces than a flat mirror would do. For motorists, the convex glass of the rear-view mirror gives a better view of the road behind.

In some telescopes carefully made concave mirrors up to 5 meters across are used. These telescopes collect and focus the very faint light of distant stars.